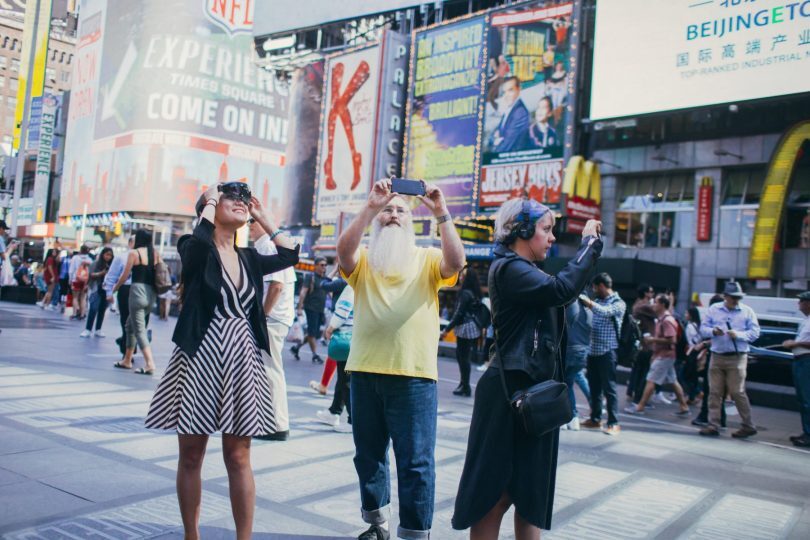 As the year draws to an end, Jonathan, our Creative Consultant, has begun looking forward to 2022 and lays out his predictions on the technologies he thinks we’re going to be seeing more of…

These days, new technologies rarely arrive with a bang but the things you first heard mentioned last year gradually start to appear in your daily life next year – and that will certainly be the case in 2022. What we should be talking about for 2022 is the expansion of arena-scale virtual reality from multiplayer gaming venues and movie tie-in experiences to wider immersive cultural experiences for entertainment, events and cultural institutions. But we aren’t because of the resources required to ensure headsets are sanitised and because punters are still nervous about putting something on their face that’s been worn by seven other people in the past hour. Instead, we’re talking about less in-your-face technologies that are going to seep into our collective consciousness over the next 12 months.

5G
5G is a set of mobile communications technologies that give greater bandwidth and allow smaller devices to do more stuff and most UK phone networks now claim around 76 cities have their 5G services. We’ll all gradually migrate to 5G as we update our phones and tablets over the next few years. Data-heavy tasks that will benefit from 5G include mobile gaming, video and music streaming, AI, mobile AR (augmented reality – mixed digital images with actual reality, viewed through a mobile device and sometimes called mixed reality – MR), VR (virtual reality – an entirely digital environment viewed with a headset) and IoT (internet of things – devices that communicate through the internet).

IoT devices also benefit from 5G networks, bringing the retailer closer to the consumer and their user journey by gathering more data on them via their connected car, fridge etc. (more accurately pushing product suggestions) and more closely tracking supply chains and deliveries with RFID (Radio-frequency identification) tags that can indicate location.

AR
AR offerings will increase because they can be delivered more quickly to mobile devices and AR is more accessible for the consumer because it doesn’t require that device to be strapped to their face – as VR does. AR art installations, such as Unmoored by artist Mel Chin, will be able to load faster and at higher resolutions. Unmoored created an animation of boats in Times Square, NYC, floating at the expected sea level in 2100 if greenhouse gas emissions go unchecked.

Add to this the LiDAR scanner used in the iPhone 12 for the first time and the capabilities of AR are making a dramatic leap. LiDAR (Light Detection and Ranging) uses lasers to calculate distance and depth. It’s the same tech that self-driving cars use to spot pedestrians and cyclists. LiDAR maps the 3D space around your phone and can solve the issue of occlusion in mobile AR. This is when an AR digital object should appear partly hidden by an object in the real world. Now that Pokemon Go you’re chasing can hide behind a tree.

Sadly, the cool stuff 5G can deliver is now recognised as contributing to the current environmental crisis because high data transfer requires more energy, and if that energy comes from non-renewable sources it’s contributing to increased greenhouse gas emissions. Internet use accounts for 3.7% of global greenhouse gas emissions (ahead of aviation’s 2%) and if the internet was a country, it would be the world’s third-largest consumer of electricity. There are ways this impact can be managed and reduced on a site-by-site basis such as cleaner coding and minimising media file sizes (something we help our clients with) – and another new technology, blockchain, is being employed to help tackle some of the wider issues around global warming.

Blockchain
Blockchain is a type of “Distributed Ledger Technology” (DLT). We’ve heard of blockchain in relation to cryptocurrencies and NFTs (Non-Fungible Tokens – a way of owning the “original” of a piece of digital art). DLTs are all about trust and one place where trust is in short supply is carbon credit trading – a tool in the climate change battle and a growth industry, even before COP26.

A DLT is a decentralized database, across multiple nodes. A blockchain is a type of DLT where data entries are recorded with a cryptographic signature called a hash. The data entries are then grouped in blocks and each new block includes a hash of the previous one, chaining them together. The result is a trusted and decentralised ledger of encrypted information.

Carbon credits are a way for nations, organisations and individuals that calculate their carbon footprints to offset those emissions by paying someone elsewhere in the world to directly reduce an equivalent amount of CO2. A simple example is when an airline in Germany calculates the carbon footprint of your holiday journey from the UK to Spain on their planes and sells you carbon credits that pay to have trees planted in Guatemala which absorb that same amount of CO2. Equally, they could contribute to the cost of building a wind farm in India that replaces energy from a coal-fired power station or some other CO2 saving venture. Carbon credit trading is the mechanism by which that happens.

Carbon credits are largely voluntary and under-regulated, leaving them open to fraud. Trees are planted, harvested and re-planted, with new credits sold each time, even though the same carbon reduction has now been double-counted. Indigenous populations have been moved to make way for tree planting schemes, diverse natural forests have been replaced with mono-species plantations and solar projects have not been built to the capacity promised.

Blockchain technology can create encrypted, distributed, ledgers of CO2 measurements with data being input directly from IoT devices on a 5G network – at both ends of the carbon credit equation. Trusted carbon credits can be traded at a higher value with the income they generate doing what they’re supposed to do, creating industries that actively reduce CO2 in the atmosphere.

So…
New technologies will give us richer digital experiences in 2022 but can contribute to the problem of global warming. Other technologies are on their way to mitigating this but data transfer can be optimised and managed and somewhere there’s a balance point between the fun, useful, data-rich immersive user journeys that we want to deliver for our clients and managing that data’s negative environmental impact. Your mission for 2022 is to find that balance point and deliver it.

And regarding the metaverse… maybe in 2023. The VR tech needs to become more user-friendly and content design needs to move beyond an avatar that looks like the one you used to play Wii Sports in 2006.